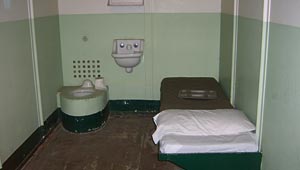 This is an island with an infamous history, and much of the former prison here remains intact. The biggest and most recognisable building still standing is the cell block and the audio tour of the building includes the thoughts of former prisoners. On your visit, you’ll see some further buildings too and you’ll also see the remains of others, like the governor’s mansion which burned down in a fire during the American Indian occupation of the island. Some buildings, like the former workhouse, are derelict and you can’t really get near them and some, like the housing for prison guards, has been demolished and all that remains are piles of rubble. On the whole though, you get to see most of what is still safe to enter and we thought the whole place was absolutely fascinating.

Of course, Alcatraz is not just famous for its penal history, but also these days it’s a place you’ll recognise because it’s appeared on TV shows and has been used as a movie location too. There’s been a big surge in interest in Alcatraz since the recent TV show began to air and if you visit the island, you’ll recognise some of the areas where filming has taken place. However, most of the indoor scenes are shot in a studio and not on the island. The National Parks service has had to deal with people heading off the prescribed walking areas trying to find the set which doesn’t actually exist!  Other productions to have been shot on the island include the movie “The Rock” with Sean Connery and the 1979 movie “Escape from Alcatraz”.  Some films like “X-Men: The Last Stand” have just used the island as part of the story but did little filming there.

Alcatraz is really quite a bleak place, even in the summer and you’ll need to bear in mind that the weather on the island can be very different to the weather in San Francisco itself.  Be prepared for a drop in temperature and an increase in wind. Over the years that the Island became a haven for wildlife and still today it’s technically a wildlife reserve with a range of sea birds that make it their home and nest on the site.

We think that Alcatraz is the one thing you shouldn’t miss in San Francisco and yet it’s actually very easy to miss out on a trip here.  This is because at peak times, the ferry crossings are often fully booked for days in advance.  Last time we went, we booked online and printed our tickets at home.  Another option is to book onto this Hop-on, Hop-off Tour which includes a ticket to Alcatraz. You’ll need at least half a day to see the island.

Alcatraz is available to visit daily with the first boat leaving just after 9am and the last boat back at around 6pm.  Adult admission including the ferry and audio tour is $28 (2012 prices). There are plenty of tour options that include Alcatraz too.