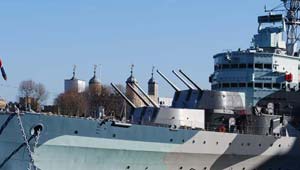 HMS Belfast is a British warship which saw action in World War 2, but now sits out her retirement on the River Thames in London. She’s a floating museum, dedicated to the seamen who sailed in the Royal Navy during the war and immediately afterwards. The ship also served the Korean War before being retired in 1963.

The access walkway to the ship collapsed in 2012, but has now been completely rebuilt. When you visit the ship, there are so many twists and turns inside her that it takes a good half a day to see it all. The thing we were most impressed by was the fact that you get to see pretty much every bit of her from the torpedo rooms to the captain’s quarters. Children go free too and our kids absolutely loved it! They got a real feel for what it was like to live and work on a warship of its era and they had questions galore both during the visit and afterwards.

We think that HMS Belfast is one of the best examples of this kind of museum we’ve seen in the world and it’s great value for money too, considering how long you’ll be able to spend on board.

HMS Belfast is open daily except 24 – 26 December, from March to October between 10am and 6pm and from November to February between 10am and 5pm (last admission 1 hour before closing).  Adult admission is £14, seniors and students £11.20 (2012 prices) but children under 16 are free. If you don’t want to hop on board, you can see HMS Belfast from the river bank or even from the river on the London River Cruise.

HMS Belfast is moored between Tower Bridge and the Hays Galleria shopping centre on the South Bank, opposite the Tower of London. The nearest tube stop is London Bridge.