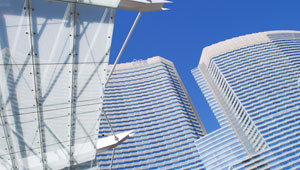 This is one of the newest hotels in Las Vegas and is part of the “City Center” development opposite Planet Hollywood on the strip.

There are no free shows, but the fountain at the front is fascinating to watch as bursts of water do battle with each other.  The hotel is also worth seeing, just to soak up the opulence of the place.  You can ride the “City Center Tram” which goes past the front of the building for free too.

In addition to the fountain at the front of the hotel, there is also a waterfall which flows down the wall which encircles the drop off area.  The impressive outside architecture and design of Aria continues inside the hotel and we were particularly impressed with area surrounding the theatre.

Through the theatre doors, Cirque du Soleil have created a show based on the music of Elvis! Aria is set back off the strip on a road which is opposite the Harley Davidson Cafe.  You can also reach the hotel by walking through the City Centre shopping centre which has a frontage on the strip.