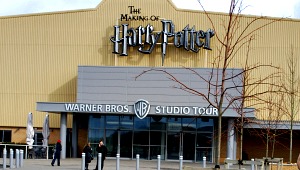 The Warner Brothers studio near Watford was the location for much of the filming of the Harry Potter series of movies. Sets were built, used and stored here but when filming on the final movie was concluded, a decision was made to turn part of the complex into a visitor attraction.

Your visit begins with the entrance hall where you’ll find giant posters of the various characters looking down on you. There’s also a Ford Anglia car suspended from the ceiling. At this point you are told that everything you see at the studios is a real prop or set that was used in the films. Nothing has been re-created.

Your ticket will have an entrance time on it, but we were allowed to enter the line for the cinema, even though we were an hour early. At this point, you’ll see the set of ‘under the stairs’ where Harry first lived at Privet Drive.

The attraction is made up of 4 different areas. The cinema presentation, 2 large warehouse-style ‘sound stages’ and an external bit linking these two stages. The cinema presentation is a great introduction to the sets and props you’ll see, but we’d recommend watching all of the films in the run up to your visit to get the most out of the experience.

The first sound stage houses the huge Hogwart’s dining hall set which you can enter, along with many sets that you can’t like the Gryffindor common room, dormitary, Dumbledore’s Office, the potions classroom, Hagrid’s hut, the Ministry of Magic, the Weasley house etc.

The exterior part is where you can see Privet Drive, the Knight Bus, the rickety bridge at Hogwart’s and the Potter cottage. You can also buy food and drink in this section.

The second sound stage houses set designs and models, a fascinating introduction to animatronics and make up, the set for Diagon Alley and the filming model of Hogwart’s which is so huge, it needs its own room!

Also at the attraction, there is a large shop, cafe and an experience where you can ride a broomstick and buy a souvenir photograph. Don’t be scared to do this even if you have no intention of buying the overpriced DVD or pictures, because it’s great fun!

Before we went, we thought the tickets were overpriced, but the whole place has an American ‘theme park’ feel to it and the attention to detail is immense. Considering how much you see and the fact that only a limited number of people a day can visit, we actually think it’s well worth the money. If you love the Harry Potter films, you’re sure to love this attraction and you’ll need a minimum of 2 or 3 hours to see it all. The hosts claim that one family stayed for 13 hours!

The Warner Bros Studios – the Making of Harry Potter, is open daily with the first tour starting between 9am and 10am and the last tour between 4pm and 6.30pm. Closing time is 3 hours after the last time slot. Adults tickets are £30, but there are discounts for children and a family ticket avaiulable too. No tickets are sold on site, so you must have purchased your ticket in advance via the official website below. You’ll find best-priced tickets including transport from central London here: Harry Potter Studio Tour Including Transport.

Although the attraction has ‘London’ in its name, it’s actually around 20 miles out of the city. If you’re staying in central London, make sure you buy tickets including transport by bus/coach from the link below.