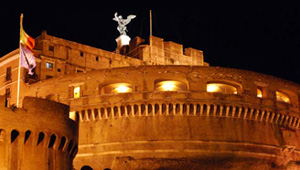 Castel’Sant Angelo is an imposing structure which sits alongside the River Tiber and contains apartments for the Pope to be kept in safety. The central part of it was originally constructed as the mausoleum for the Emperor Hadrian, but was converted later by a Pope into the defensive fortress you see today.

There are 6 different levels at the castle including the entrance floor and the flat roof top which has terrific views over central Rome. When you enter, you first walk up the original Roman passageway that Hadrian’s body would have been taken along, but the newer parts of the building contain beautifully decorated ornate papal apartments, courtyards, passageways and ramparts. We’d recommend that you take the audio tour because little is marked.

If you’ve read the Dan Brown book “Angels & Demons” or seen the film with Tom Hanks, you’ll recognise Castel Sant’Angelo as the location where the Illuminati held four senior cardinals captive.  The raised wall walkway from the castle to the Vatican known as Passetto di Borgo (or Passetto) is also featured in part of the story, but this walkway is not part of the main public access. For more on this side of the castle, consider taking the Rome Angels & Demons Half Day Tour.

Castel Sant Angelo is open every day except Monday from 9am to 7pm and adult admission is 8.50 Euros (2012 prices). Outside, spend some time on the bridge (Pont Sant Angelo) which is lined with Bernini statues. Castel Sant’Angelo is also included in the Classical Rome Morning Tour.

Castel Sant’Angelo is on the banks of the River Tiber at the start of Via della Conciliazione, the grand roadway leading to St Peter’s Square in Vatican City. The nearest Metro stop is Lepanto.