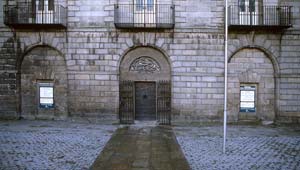 This former prison is a legacy of British rule in Ireland with a gruesome past, but it’s also a prison interior you are likely to recognise because it’s been used in many movies and TV Shows. The most notable movies to be filmed here include The Italian Job and In The Name of The Father.

The gaol was originally built in 1789, but was restored in the 1960s and the main cell block is just as you’d imagine a Victorian prison to look. We took a guided tour and the guide was excellent. We got a real sense of how this place was a symbol of the struggle against British rule and the fight for Irish independence. You get to so most of the major areas of the gaol on the tour, ending in the exercise yard which was the scene of executions in years gone by.

Kilmainham was decommissioned as a jail in 1924 by the Irish Free State government. Considering its history, no-one wanted to preserve it and it began to decay. The demolition of the building was even considered in 1936.  An official inspection after the second world war found that it was in a ruinous condition. Things only changed for the gaol when a preservation society was given the keys in 1960.

The gaol is approximately 3 miles from Dublin City Centre on Inchicore Road in Kilmainham. We used the Dublin Hop-on, Hop-off Bus Tour to get there.  Alternatively, you can catch bus services 79, 79A, 78A & 51B all from Aston Quay in Dublin

Kilmainham Gaol is open every day from April to September between 9.30am and 6pm.  From October to March, the gaol is open Monday to Saturday from 9.30am to 5.30pm and on Sunday from 10am to 6pm.  Access is only available via the frequent tours which cost 6 Euros for adults (2011 prices) but admission is free with the Dublin Pass.