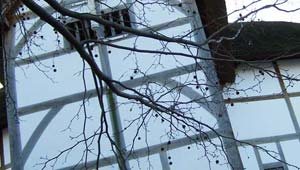 Shakespeare’s Globe is a recreation of the theatre that became synonymous with Shakespeare’s plays. It was built only after a huge fund raising drive with many top British actors involved. They wanted Shakespeare’s plays to be performed in the kind of round theatre for which they were written and this one resembled the former Globe that existed in his time. You can now experience plays there regularly but the building itself is an attraction that’s best visited on the theatre tours.

We thought the tour was fascinating and well worth doing. On it, you get a bit of a potted history of how the theatre came about and how it is maintained. You get to climb up to the highest seats and sit in the theatre boxes. All in all, the tour is designed to show you why those involved in fund raising felt this kind of theatre should be built. The tour lasts around 30-40 minutes and is fully guided but then you are allowed unlimited time in the exhibition which details how the Globe was re-created, background on the works of Shakespeare and London in his time.

Adult admission to the Globe Theatre is £10.50 (2010 price) with discounts available for children, seniors, students and families.  Shakespeare’s Globe is open for tours from 9am to 12.30pm daily (11.30pm Sundays) in theatre season and from 9am to 5pm daily out of theatre season. Get latest tour prices here.

You can’t miss the Globe along the River Thames as it’s so much older looking than the buildings around it!  It’s on the South Bank and the nearest tube stops are London Bridge (10 min walk) or Mansion House (10 min walk).