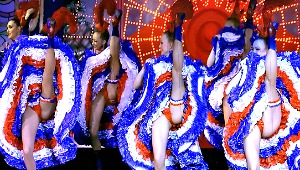 The Moulin Rouge hosts the best known dancing show in Paris dating back to 1899! You can choose to have dinner with the show, or just pay for the show on its own. Whichever option you choose, the show is a feast for the eyes, with a mix of variety acts, circus and acrobatic skills and the topless dancing girls with their often feathery costumes. It is quite a ‘traditional’ show, but it’s non-stop entertainment. It’s been done like this for decades and you wouldn’t want it any other way.

To be honest, the whole place looks a little run down on the outside but the inside is totally different. It feels like a luxurious gentleman’s club from years ago. We had dinner before the 9pm show and you are seated on a table for 6 or 8, so unless you have a large number of people in your group, you’ll be sitting next to strangers.

You will have chosen your menu in advance and being served is like a military operation. All the meals come with half a bottle of champagne or wine per person. We had a terrine, which was delicious, followed by chicken which was rather bland and an amazing chocolate dessert. The portions aren’t huge, but it’s certainly enough to keep you going. There is live music during dinner, for us this consisted of a decent band and a couple of not so decent singers who just looked they were going through the motions.

The show itself though, was totally different.From the moment the guys and girls come on stage, they draw your eye with incredible costumes. There are more feathers than you’ve ever seen before, together with shiny beads and even fairy lights. In between the various themed dances, there are variety acts of the highest standard. We saw some hilarious acrobats, a very entertaining juggling comedian and the most impressive gymnastic circus-style act we’ve ever seen. The stage gets more and more impressive as the show continues too with a water tank and moving stairways.

All in all, the Moulin Rouge was well worth the money and is one of those special experiences you want to say you’ve had. It’s not somewhere you’re likely to go back to, but it’s somewhere you’ll remember for a long time to come.

The nearest Metro station to the Moulin Rouge is Blanche and when you emerge from the exit, the theatre is just across the road.

MORE ON THE MOULIN ROUGE