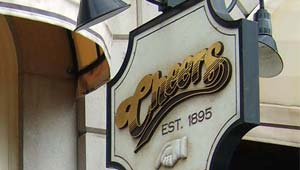 Cheers Bar in Boston is the exterior of the building used for the long-running TV series “Cheers”. It’s actually not called Cheers at all, but is the Bull and Finch pub near Boston Common.

The inside shots for the TV series were filmed in a studio, so you won’t recognise the interior but it’s still worth going inside. When you walk down the stairs, you’ll find a bar and gift shop along with some Cheers history.

Like many tourists, we took the obligatory photo outside and had a quick look inside before moving on but we’re glad we did it. There were others doing the same thing when we were there and it’s no surprise that this location is a very busy tourist attraction when you consider that Cheers ran for 11 primetime seasons beginning in 1982.  Millions of people around the world are familiar with this little bit of Boston, although most have never been there.

The Bull and Finch was not only used for the exterior shots, but is also considered to be the “inspiration” for the TV show too.  The legend says that in the summer of 1981 two screen writers from Hollywood, Mary Ann and Glenn Charles, wandered into the Bull and Finch looking for a bar to feature in their new TV series and the rest is history!

Cheers Bar is across the road from the Beacon Street edge of Boston Public Gardens, near Boston Common.  The nearest T station is Park or Boyleston.