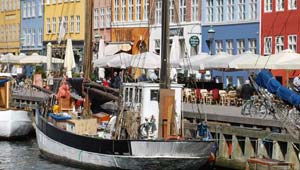 Nyhavn is the prettiest street in Copenhagen! There are walkways either side of a canal and the buildings along it are painted brightly in different colours. The walkway is big enough on one side for the restaurants here to serve food and drink outside as well as inside and when the weather is fine, the tables are jam packed.

There’s no doubt that this street is a tourist hotspot, but for us this was also the heart of Copenhagen. You can enjoy Nyhavn just by walking along the cobbled path, but it’s extra special to eat outside too. Most of the restaurants offer heating lamps and blankets to make sure you don’t get too cold. Eating out in Denmark is fairly expensive, especially if you add alcohol to your meal so if you plan to eat on Nyhavn, look out for the set menu offers which can save a considerable amount. Many of the best deals on food are at lunchtime, but some are also available in the evening. Also, be careful not to confuse the lunch menus with the evening ones. The Danish word for lunch is Frokost.

Other sights to enjoy in this area include Kongens Nytorv – an attractive large cobbled square at the end of Nyhavn where it’s common to find street markets and entertainers.  Here you’ll find the former Hotel du Nord which is now the Magasin department store. As a hotel it was home to Hans Christian Andersen who rented two rooms in the attic. Hans Christian Anderson also lived in Nyhavn at numbers 20, 67 and 18.

Across the road from the Hotel du Nord is the beautiful Royal Theatre (Det Kongelige Teater) and at the other end of Nyhavn, where the canal enters the harbour, you’ll find the Royal Danish Playhouse – a modern theatre with a terrific view out to the Opera House. If you want to visit the Opera House, there is a water taxi which leaves regularly from this point.

Nyhavn is right at the heart of central Copenhagen and is based around the small canal which juts off the main harbour area and many bus routes stop here including the Hop-on, Hop-off Bus Tour. The harbour water taxi also has a stop.

Hop-on, Hop-off Bus Tour – You can get on and of at Nyhavn
Nyhavn – Wikipedia
Hotels near Nyhavn – We recommend Hotels.com for the best rates
Copenhagen Grand Tour – Includes Nyhavn
Copenhagen Card – Free access to the Amber Museum and many other top attractions
Copenhagen Travel Guide Books – Amazon.co.uk
Copenhagen City Guide – From our sister-site Free-City-Guides.com