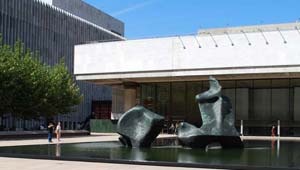 Lincoln Center is a collection of buildings in New York dedicated to the performing arts. The complex was completed in the 1960s has provided homes for the New York Philharmonic, the Metropolitan Opera, the New York State Theater and the Julliard School for the Performing Arts. If you’re a fan of the Oscar winning movie Black Swan with Natalie Portman, you’ll want to call in here as the buildings are featured in many scenes.

The first thing you notice about a visit to Lincoln Center is just how big it is! The various buildings are set out over 16.3 acres and the open spaces and plazas are very spacious. What you don’t immediately realise when walking the plaza areas is that the centre is also under your feet. Take one of the escalators to go down to the underground parts.

The Lincoln Center claims to be the world’s leading performing arts centre with 12 resident organisations. Concert tickets, show times and event listings can all be found on the Lincoln Center Official Website. Also, look out for a range of art sculptures to admire around the centre, most notably Henry Moore’s Reclining Figure in the North Plaza.

Lincoln Center is now the home of New York Fashion Week when large tents are erected in the grounds.  Fashion Week is held in February and September each year – it was formerly held in Bryant Park.  Guided tours of the centre take place from 10.30am to 4.30pm daily and cost $15 for adults (2012 prices).  Bear in mind that tour times do vary depending on commitments and use of the buildings.  The tour is free with the New York Pass.

We enjoyed just walking around the plaza, watching the water fountain and looking at the buildings. The Lincoln Center is on Broadway at 64th Street.