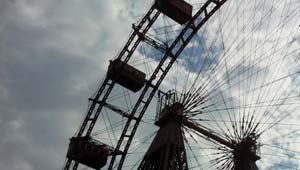 The Reisenrad Wheel is Vienna’s most prominent landmark and it can be seen for miles around. Many cities in the world these days have a modern version of this kind of wheel, but what makes the Reisenrad extra special is its history. It’s been spinning visitors for well over a hundred years. When you ride the it, you get terrific views of Vienna, but also a real sense of its history with the old wooden cabs and distinctive square windows.

It was built to mark the Golden Jubilee of Emperor Franz Josef in 1896 and has stood through lots of ups and downs over the years including Nazi occupation. You may also have seen historic black and white images of the wheel with the Nazi Swastika flying from the top when Austria was occupied during the war. The wheel originally had 30 cabs, but after it was severely damaged in the World War II, it was rebuilt with only 15. There was also a serious threat to its existence in the late 1990s but its long term future was secured in 2002 with a huge renovation project.

You’ll probably remember it from the movie “The Third Man”. Another movie that you might have seen the wheel in is the 1987 James Bond Film, The Living Daylights.  The wheel originally had 30 cabs, but after it was severely damaged in the World War II, it was rebuilt with only 15.

You do get the feeling though that wheel hasn’t had the love and attention it deserves over the years.  This maybe because it is part of the Vienna Prater – a huge amusement park with traditional fairground rides and attractions.  Whilst the fairground attractions look best and are busiest at night, bear in mind that there’s not much to see from the wheel when it’s dark. Riesenrad is in Vienna’s second district of Leopoldstadt.

The Riesenrad wheel is open daily from May until September between 9am and 11.45pm, in March, April & October between 10am and 9.45pm, and from November to February between 10am and 7.45pm.   Adult admission is 9 Euros with a family tickets starting at 23 Euros (2012 prices).  Another option for riding the wheel is the Vienna Wine Tavern Night which includes a trip on the Riesenrad.

MORE ON THE RIESENRAD WHEEL