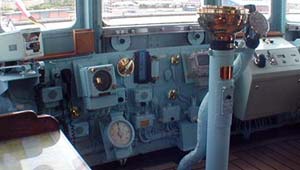 The Royal Yacht Britannia was Queen Elizabeth II’s beloved yacht which she had to part with in a cost cutting measure in 1997. It’s now a floating tourist attraction so you can see how the Queen and her family used to live whilst sailing around the world on behalf on the UK. It’s based at a huge shopping centre in Leith, just outside Edinburgh and it’s an absolute must on any trip to the area.

A giant walkway has been erected to allow easy access from the Ocean Terminal shopping centre onto the ship which is moored in the docks alongside. When you board, you’ll see the royal apartments, walk the decks and see the crew quarters just as they were when the yacht was in service. You can buy fudge from the NAAFI, have your photo taken by the ship’s bell and imagine you are a royal.

The ship has travelled all over the world and it has featured in some iconic moments in the history of the British royal family too like the moment Princess Diana greeted her children with arms open wide in full view of the press and the tears shed by the Queen when the ship was decommissioned.

While you’re at the Royal Yacht, you can easily spend some time inside “Ocean Terminal” which has been part of the transformation of the old docks. There are masses of shops, but also cafes, restaurants and a cinema.  We think you’ll need to allow 2 to 3 hours for your trip to the Royal Yacht Britannia, more if you plan to eat and shop in the Ocean Terminal centre. We thought it was worth every penny of the entrance fee – a great attraction at a decent price.

In peak holiday times we’d advise that you pre-book tickets here to avoid waiting when you get to the yacht.  In other times though, we’ve been able to buy tickets and hop straight on board.  The Royal Yacht now has a “tea room” on the Royal Deck which allows you to enjoy refreshments with all the views of the waterfront. The Royal Yacht is open daily as follows:
November, December, January, February & March from 10am – 3.30pm (last admission).
April, May, June & October from 10am – 4pm (last admission).
July, August & September from 9.30am – 4.30pm (last admission).
Adult admission is £11.75 which includes the audio guide (2012 prices). Family, HM Armed Forces and concession tickets are also available.  You can buy tickets in advance and check for best prices here.

Busses to Ocean Terminal run every few minutes from Princes Street (No 22) and regularly from other areas of the city too.  The journey takes around 15 minutes.   Alternatively use the Edinburgh Hop-on Hop-off Bus Tour which stops at Ocean Terminal

MORE ON THE ROYAL YACHT BRITANNIA