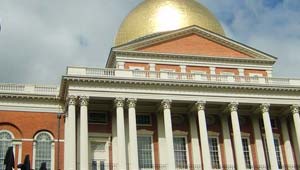 The Boston Freedom Trail is a 2.5 miles long route around the city which is marked out in the sidewalk with red bricks.  Basically, it takes you to the various historic sites of significance in the fight for American independence. So you’ll see churches, meeting houses, burial grounds, parks and a ship amongst the various locations.

If you love American history, this trail is for you!  If you don’t, it’s still a good way to see the sights of Boston and get a feel for the history of the place.

The trail officially starts at Boston Common where you’ll find the Visitor Information Centre.  Here you can pick up maps, and leaflets explaining the sights you’ll see on the trail. However, once you have your map, you join and leave the trail wherever you like. This is the full list of stops along the freedom trail…

1. Boston Common – America’s oldest public park covering 44 acres and a place for public hangings is the official start of the Freedom Trail.

2. Massachusetts State House – Built in 1798, it’s the oldest building on Beacon Hill and was constructed on John Hancock’s cow pasture! (pictured at the top of the page)

3. Park Street Church – The congregational church which hosted some of the most impassioned protests against slavery.

4. Granary Burying Ground – The resting place of most of Boston’s most famous sons including Paul Revere.

5. King’s Chapel – One of the finest examples of Georgian church architecture in America, despite the fact that the steeple was never added.

6. King’s Chapel Burying Ground – This burial ground is as old as Boston itself and includes the grave of the first woman to set foot on the Mayflower.

8. Old Corner Bookstore – Originally an apothecary before it became a prominent printing house and book store.

9. Old South Meeting House – This meeting house was the stage for some of the most dramatic events leading up to the American Revolution.

11. Site of the Boston Massacre – At the front of the Old State House is the marker showing where tensions on both sides led to five deaths.

12. Faneuil Hall – The upstairs meeting room here is where some of the most important revolutionary discussions began.

13. Paul Revere House – The oldest building in downtown Boston is the former home of Paul Revere.

14. Old North Church – This place of worship opened in 1723 and is the oldest standing church in Boston.

16. Bunker Hill Monument – Marking a notable battle against the British which left them with significant casualties.

If you don’t want to walk the Freedom Trail by yourself, there are informative Guided Tours available too.  These tours consistently receive good reviews from other tourists.

The start location for the trail and home of the Information Centre is Boston Common.  The trail is maintained and promoted by the Freedom Trail Foundation.

MORE ON THE FREEDOM TRAIL