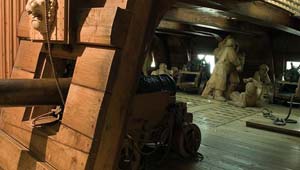 The Vasa Museum in Stockholm houses a fascinating maritime relic with an amazing story! Inside you’ll find an incredibly preserved galleon from 1628 which sank on its maiden voyage and lay at the bottom of the harbour for over 300 years. The reason it survived so well preserved, is because of the properties of the water in the harbour.

The Vasa Museum was specially constructed to house the warship and this is now the most visited museum in Scandanavia. Once you’ve been you’ll understand why.  To see a vessel like this preserved as it was when it sank is truly amazing. It’s a bit like something from “Pirates of the Caribbean” and the detail the remains is just incredible.

Sadly, you can’t go on board the Vasa, but there are several levels of walkways all around the museum which will give you plenty of chance to get up close. The bizarre thing about the Vasa’s story is that it was ordered by a King who wanted an extra gun deck to make the ship invincible. It was to be the flagship of the fleet, but sadly, this was also its flaw though as the ship was too top heavy and rolled over and sank almost immediately. It was a fatal design fault and many men drowned because of it.

Whilst the main attraction of the museum is the ship itself, there are also a range of permanent exhibitions which tell the story of the Vasa, how it came to be built and more about the design flaw that made it sink. One of the exhibition areas also focuses on what life would have been like on board and includes a replica of the gun deck. There’s a detailed scale model which we spent ages looking at too.

To get the most out of your visit, we’d recommend taking one of the guided tours which are included in the entrance fee.  These are available in English at 10.30am (Weekends only), 11.30am, 12.30pm and 3.30pm.  If you don’t want to take the tour, another option is the mp3 audio tour which you can download for free here.

The Vasa Museum is open every day, from June to August between 8.30am and 6pm and from September to May between 10am and 5pm (8pm on Wednesdays).  Adult admission is 110 SEK (2011 prices).  Admission is FREE with the Stockholm Pass which is well worth the money if you’re planning to visit a number of sights in the city.

The Vasa is on the island of Djurgården. We walked to the museum which takes about 30 minutes from the Central Station.  By metro, the musuem is 10 minutes from the Karlaplan station and by tram take the no 7 service towards Waldemarsudde. Another option is the Blue Route on the Stockholm Hop-on, Hop Off  Tourwhich stops at the Vasa Museum.

MORE ON THE VASA MUSEUM