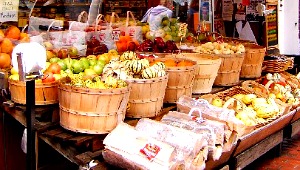 Beacon Hill is a historic and desirable area of Boston and it’s a lovely place to walk around.  It’s only on the edge of downtown Boston, but you’ll feel like you’re a world away in another time period.  The things that make this area such an attraction are the narrow streets, some of which are cobbled, and the beautiful red-brick houses.

All of the streets are nice, but the one we liked the best was Acorn Street, built in the 1820s which is cobbled and has perfect houses lining the road.  The other notable street is Charles Street which is a busy road lined with attractive shops.

We’d recommend that you spend an hour or so just wandering around the streets.  Think of some of the famous names who’ve lived here while you’re doing it – Edward Kennedy, Sylvia Plath, Uma Thurman, Dave Lee Roth, Carly Simon and John Kerry to name just a few.

While you’re exploring Beacon Hill, you can call in at the new Massachusetts State House with it’s striking gold dome.  Although it’s described by Bostonians as the “new” building, it was actually built in 1798.  The State House is open from Monday to Friday between 10am and 4pm and admission is free.  Volunteers show visitors round on free tours from the Doric Hall but large groups should arrange in advance by calling +1 617 727 3676.

Another attraction is the Rose Nichols House Museum at 55 Mt. Vernon Street.  This is one of the few Beacon Hill houses open to the public.  Open from Tuesday to Saturday from 12pm to 4 pm with tours every half hour priced at $5. Tel: +1 617 227 6993.

Guided Walking Tours of Beacon Hill are also available and consistently get good reviews from other tourists who’ve been on them. You’ll find Beacon Hill near the new State House building sandwiched between Beacon Street (which runs along the edge of Boston Common) and Cambridge Street.

Beacon Hill covers an area of approximately one half mile square and is bordered by Beacon Street, Bowdoin Street, Cambridge Street and Storrow Drive.  There are no T stops within the centre of Beacon Hill, only on the outskirts at Charles MGH and Bowdoin.