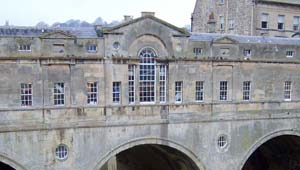 Pulteney Bridge in Bath is one of the world’s most beautiful bridges and is likened frequently to the much larger Ponte Vecchio in Florence. The bridge was built to connect central Bath to the other side of the River Avon in a style that fitted its surroundings. It was built in 1773 by designer Robert Adam who had a hand in many of Bath’s structures. The bridge architecture is therefore very similar to the historic stone-built Georgian landmarks of Bath.

When you cross the bridge, you can call into the various little shops built into it and you’ll marvel at how they’ve been constructed in such a small space. It is one of only 4 bridges in the world with shops across the full span on both sides.

Pulteney Bridge is so important architecturally that it has been designated a grade 1 listed building. However, both sides are not equal in their attractiveness. The bridge is best viewed from the road behind Bath Abbey and most pictures of the bridge are taken from the South side because over the years, businesses the North side were allowed to extend their shops how they liked and the original look of the bridge has been lost.

Pulteney Bridge is a public street and is open to the public 24 hours a day. The shops on the bridge though are only open during normal shopping hours.