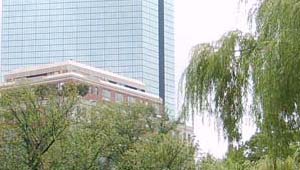 Boston Common is a 50 acre public park. It marks the start of Boston’s historic “Freedom Trail” and is also one of the oldest parks in the USA.  To locals, it’s known simply as “The Common” and has had many uses over the years from grazing cattle to public executions!

It’s a great place to spend some time at most times of the year and while you’re there, look out for some of the notable features like the Central Burial Ground, Frog Pond and the location of the “Great Elm Tree” which was a symbol of freedom before it was destroyed in 1876.  Today the common links a number of other green spaces which form a central “lung” of open space in the city.  The best route through this ‘lung’ is to take the central path through Boston Common towards the Public Garden, because you get to see most of the notable features of both by doing this.  The two parks are split by a road but there is a pedestrian crossing to get you from one side to the other.

We enjoyed the history of the common, although the more formally laid out “Boston Public Garden” next door is more appealing to the eye.  It’s dominated by a central lake which is crossed by a beautiful bridge. In summer, you’ll be particularly impressed with stunning floral displays. Notable landmarks in the park include the statue of George Washington on horseback and we really liked the set of bronze statues based on the main characters from the children’s story “Make Way for Ducklings” which is located between the pond and the Charles and Beacon streets entrance.

We also enjoyed following the tree lined path that leaves the garden and heads into Back Bay.  There’s plenty to see along the way including the memorial to the Boston fire fighters who died tackling a large blaze when a building collapsed.

Location: Boston Common and Boston Public Garden are next to each other in the South West of the centre of Boston near to the Charles River.  The Common is bordered by Beacon Street, Charles Street, Tremont Streetand Park Street
Tel: +1 607 357 8300