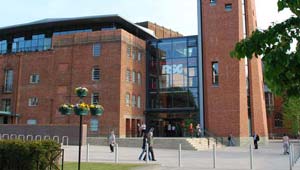 The Royal Shakespeare Company theatre complex in Stratford upon Avon is one of the biggest attractions in the town. It had a major renovation and re-development recently and opened again in 2010 and it’s well worth seeing. The re-modelling has totally transformed the original building with a new frontage, new bits bolted on the side and a giant tower which now dominates the public park below.

The best way to experience this building is to see a play, but if you haven’t got time for that, it’s well worth exploring the building itself as it’s open to the public and with the exception of the tower, it’s free to enter.  Inside you’ll find cafes, a restaurant, seating areas, a shop, and the original 1930s art deco foyer including the old silver box office frontage which is still in place…but can be moved up and down to allow better access to the theatre. Look inside to find the old external wall of the original building and in the restaurant, look out for 3 chairs on the wall above the tables, which mark the exact position of the old back row.

Outside the building at the rear, you’ll find the only surviving part of the original Victorian structure.  The rest was destroyed in a fire in 1926.  This part of the complex houses the Swan Theatre and next to it stands all that is left of an original tower from the Victorian building which was destroyed in the fire.  The new tower at the front is a tribute to the old one, which was also open to the public to offer fine views over Stratford upon Avon.

If you want to see a play, we can thoroughly recommend performances here after seeing Macbeth in 2011.  It was absolutely stunning!  Don’t worry if you find Shakespeare difficult to follow, because the acting and the staging really bring the stories to life. We’ve seen Shakespeare all over the place – but there’s nothing quite like the RSC.  Make sure you book well in advance of your trip though, or you may be disappointed.  Tickets for performances are available from the RSC Ticket website.

The RSC theatre complex is open from 9am Monday to Saturday and from 10am on Sundays.  Adult admission to the new tower is £2.50 with concessions available (2011 prices).

We’d also recommend the RSC Theatre Tour which is a fascinating way to see how the old has been melded with the new in the RSC theatre.  The tour also takes you “behind-the-scenes” to wardrobe, the lighting booths and the audio description room.  You sit in both theatres, see where the production director controls the show and get a feel for how precise the timings in an RSC production have to be.  We liked this tour because it was a combination of an architectural tour and a traditional theatre tour.  Our guide was fascinating and was able to answer pretty much anything that was asked of him.  We would have liked to have seen even more of the non-public areas of the theatre complex and it would have been great to stand on the stage, but all in all it was a great insight into the building.

The theatre complex is located alongside the River Avon in the waterside area of Stratford.  Nearby you’ll find Cox’s Yard and the Dirty Duck (Black Swan) Pub.

MORE ON THE RSC THEATRE IN STRATFORD UPON AVON